What are NFTs and why do they have people so excited?

A Non-fungible Token (NFT) is a digital asset which cannot be copied, substituted, or subdivided, meaning it is wholly unique. This is in contrast to the assets you use on a daily basis which tend to be fungible. For instance, a pound coin is worth exactly the same as any other and can be freely swapped around without you losing any wealth.

Despite the memes, NFT’s can be used as a variety of items with real world applications, such as: Deeds to a property/piece of land; A domain name (for those old enough to remember the dot com boom); Or, for the focus of this analysis, unique digital artworks. As an example, below is the first NFT, “Quantum”, created by Kevin McCoy.

NFT’s are stored on blockchain systems, notably Ethereum, with the owner of an NFT being whomever has access to the wallet it is stored within. Selling a house certainly becomes a lot less of a headache when all you need to do is send the deed to the buyer’s wallet instead of involving lawyers and estate agents.

, can make, buy and sell NFTs. This is usually done via cryptocurrencies on marketplaces like OpenSea (an Ebay for NFTs) or directly from person to person.

Since Quantum many NFT artworks have arisen including Cryptokitties and Cryptopunks. This culminated in a boom in 2021 which included the arrival of the Bored Ape Yacht Club, with NFTS reaching a global market valued of $15.7 Billion.

Set your tokens to spun

With such large amounts moving around in a seemingly unregulated market this has naturally attracted criminals looking to get in on the action. For instance, a recent crime report from Chainalysis revealed that 262 users have been participating in wash-trading their NFTs.

A wash-trade occurs when the buyer and seller within a transaction are the same person or group of people. This is normally done to mislead potential buyers into thinking the asset is worth more, by pumping up the price with each trade, or to make them believe it has very high liquidity, i.e., if they buy it, it can be quickly sold at any point in the future. In reality when they do buy it, they find they cannot sell it to anyone for remotely close to the price they purchased it for.

The authorities have been hot on the heels of NFT crime, where just last month a former NFT marketplace employee was charged with the first case of digital asset insider trading. This won’t stop criminals from attempting to make money off NFT’s, but it will force them to attempt to better obscure their activities.

This got us thinking. Network of transactions… occurring over time… complex patterns hidden in large volumes of data… if only we had a tool to let us investigate further

! Fortunately, Raphtory was at hand to let us dive into the problem.

What are we digging into?

With the above premise in mind, we set out to see what sort of patterns we could find within the network of trades, specifically focusing on cycles. This is when a NFT has been sold by a wallet, but eventually ends up being owned by it again. This can involve a chain of any number of other wallets, take any amount of time, and increase or decrease the price by any amount.

Below we can see an example of such a cycle where Wallet A sold an NFT to Wallet B for $50 on Monday, but its back in their position by Thursday, costing them $750. They either have serious sellers remorse or, more likely, the same person owns all these wallets and is trying to pump up the price of the given NFT. 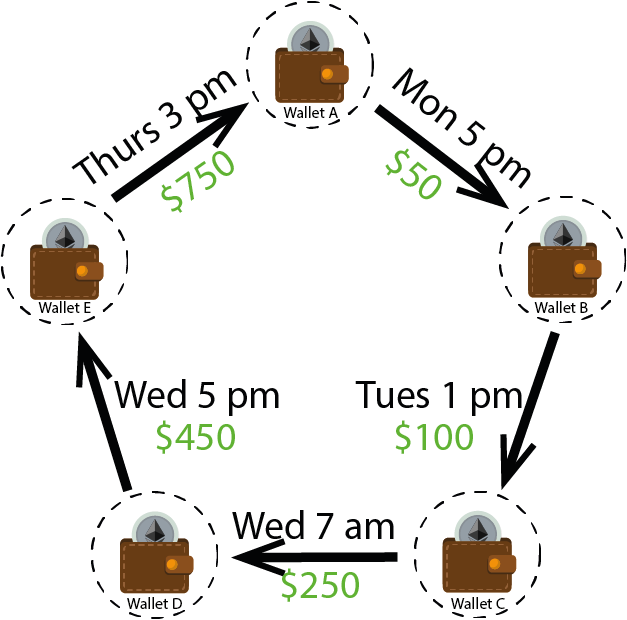 This example opens many initial questions about the network which we will explore, such as:

We have our tools, where’s the data?

To answer these questions we used open data from the “Mapping the NFT revolution: market trends, trade networks, and visual features” paper. This dataset contains 4.7 million NFTs that in total were traded across 6.1 million transactions between June 23, 2017, and April 27, 2021.

The data is pre-classified and contains transaction details for NFT sales including the buyers, sellers, type of NFT, price and time. The sales are spread across various tokens and cryptocurrencies, however, in some cases the price data in USD was unavailable. To handle this, we filtered the data to those traded with Ethereum where we could obtain the average $ Dollar \rightarrow Ether$ price for the day of the trade. This left us with 2.3 million trades across 3,384 NFTs, an example row of which can be seen below.

Prior research has analysed this data as a network of wallets, however, we took a different approach. We created a bipartite graph, meaning a graph with two types of nodes, corresponding to wallets (addresses) and NFTs. Directed edges $Wallet\rightarrow NFT$ in this network indicate a purchase.

From the perspective of an individual NFT within this model we can see all the wallets which have purchased it, when these occurred and for how much. With this information it is trivial to rebuild cycles of any length.

Below is an example of a bipartite graph. On the left we have Ethereum wallets, the right NFTs, and the edges indicating who has purchased what. Some of these transactions (in green) appear to be innocuous, whereas others (in red) are part of a cycle to pump the value of NFT B.

Digging into this we can see that there is a wallet cycle $A\rightarrow B\rightarrow C\rightarrow A$ over the course of 4 blocks, pumping the price from 0.8ETH to 2.6ETH. 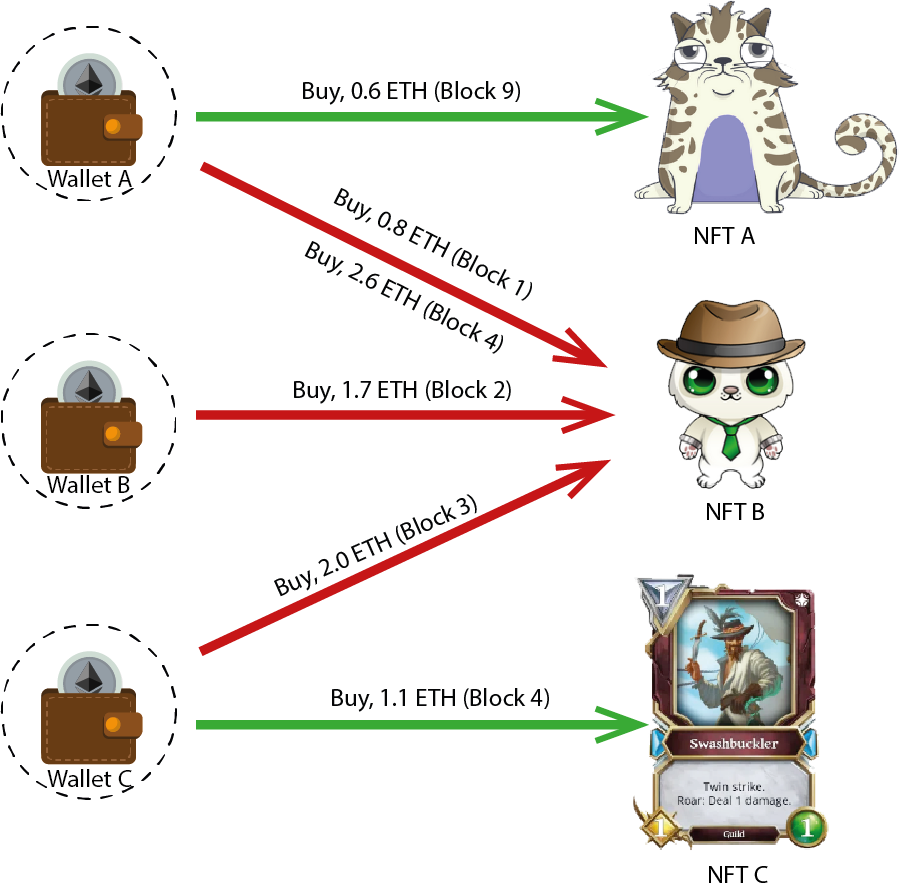 What did we find!

After running this algorithm, we identified 16,673 cycles whereby the user had purchased the NFT at a higher price than they originally sold it at, which we denote as an appreciation. Of these over 90% appreciated less than $80, but there is some very strange patterns in the outliers.

Below we have two plots comparing the cycle duration to both the length of the cycle (unique involved wallets) and appreciated price for the traded NFT. What is really startling here is that the cycles involving the most wallets overwhelmingly finished in the shortest amount of time whilst generating the greatest appreciation! This was deeply fishy and needed to be probed further

Not at all, there are many instances where this is totally legitimate behaviour and makes sense when you have a niche community trading amongst themselves. For example the longest cycle found involved an NFT from the Major League Baseball collectible game, traded over 206 times. This specific NFT started with the buyer (0xe7387) originally purchasing the figure for ~22.68 USD (0.1296 Ether) then repurchasing it after 44 days for ~26.24 USD (0.1296 Ether).

Given the large amount of time between their first and last purchase, and the low profit, this is much more likely someone just repurchasing a collectable they wanted back.

But some certainly are! 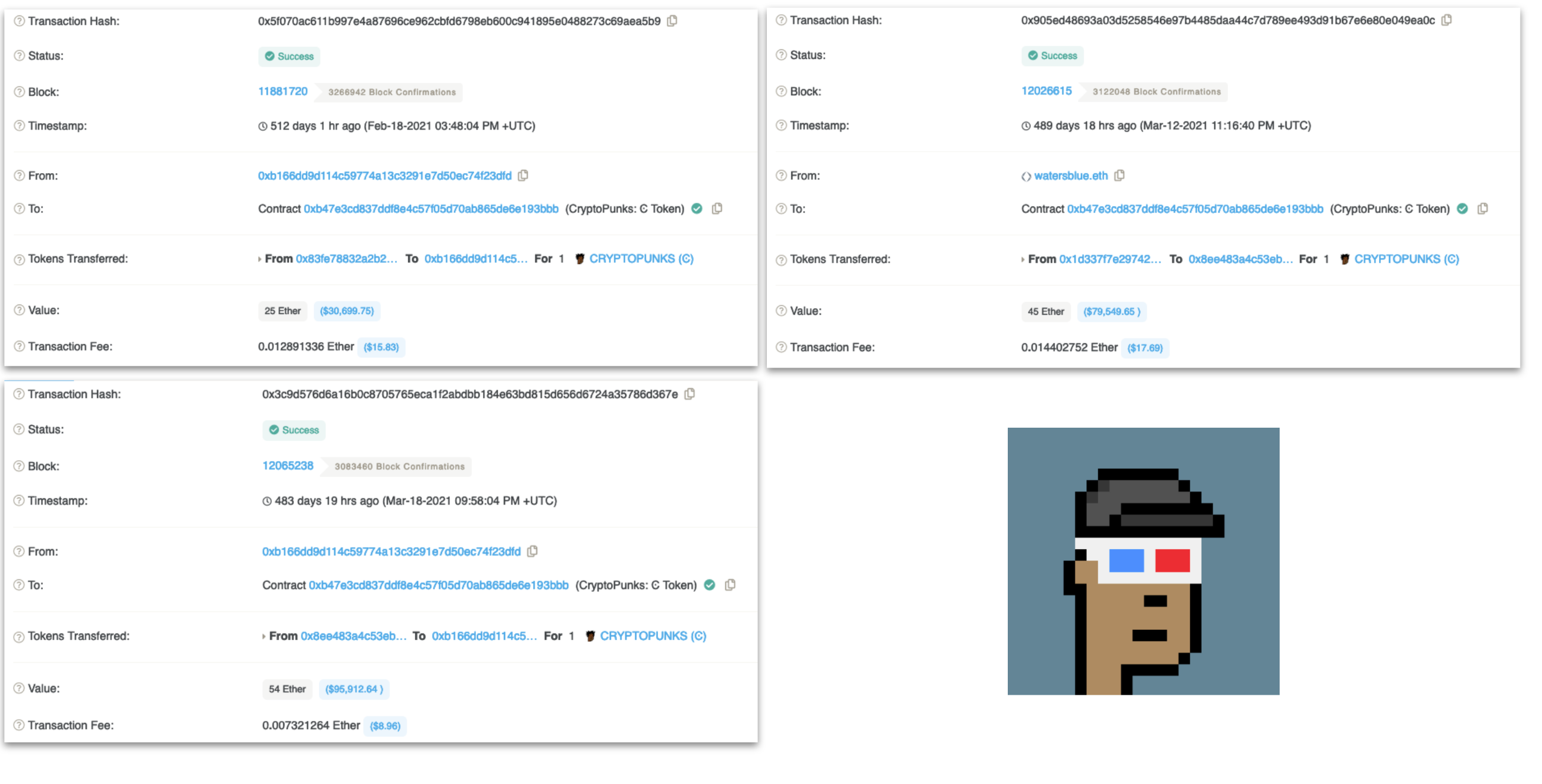 Purchases and sales of Cryptopunk 8033 by the same wallet

Whilst an individual cycle may or may not be suspicious, if we see the same repeating patterns involving the same wallets, the evidence can compound. The next question is, therefore, are there certain groups or individuals conducting the majority of these cycles?

Picking out one of these whales from our dataset we found that trader 0x8acc was involved in 617 cycles, gaining a total appreciation of ~1,389 USD (averaging $2.25 per trade). By looking further into these cycles, we find that they traded 32 NFTs belonging to Etheremon, Cryptokitties and Mlbchampion between 20 wallets across 12,874 transactions. A selection of these NFT’s can be seen below. 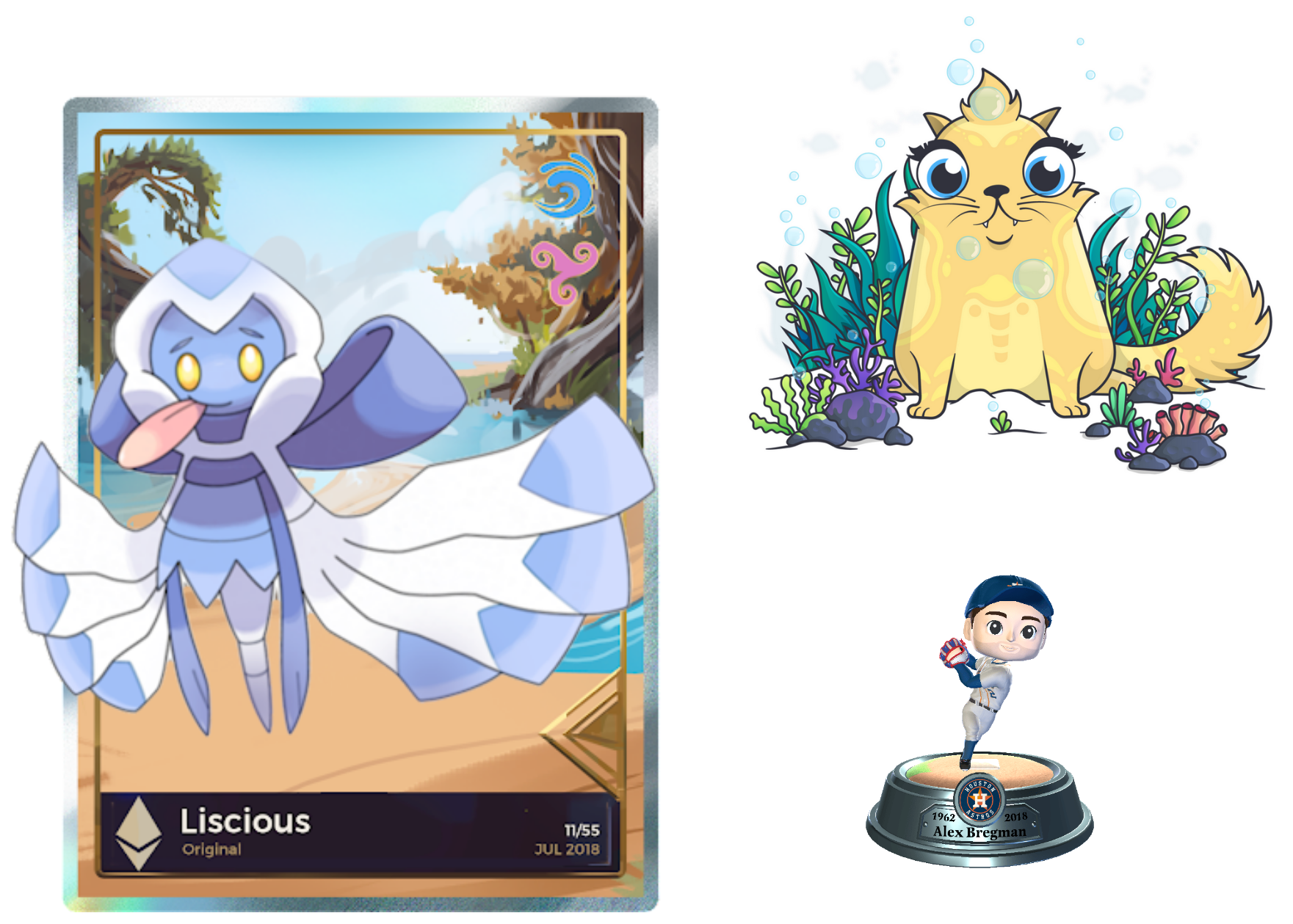 Three of the 32 NFT traded by wallet 0x8acc

By exploring the inter-purchase times of each transaction within the cycles we further identified that over 88% of transactions executed in 3.4 hours to 4.6 hours increments. For example below we’ve simplified the transaction time deltas of Ethermon #34508 being traded between these wallets.

Repeating this analysis on the rest of our whale pod we discovered that these too followed the same pattern, purchasing and trading NFTs between the same groups of wallets, with the same 3-4 hour time window.

The dataset we used did not take into account transaction fees. Due to the small price changes on these NFT’s across the cycles (probably less than the total fees paid for the transactions) these accounts could be a number of points. These could be accounts owned by the same entity or group performing wash-trades, a veteran NFT trader trading within their close knit community or a case of NFT creators employing automated Market Maker bots to generate liquidity for their tokens. This is useful in someways as it kick starts the community and allows first adopters to easily make purchases, but can veer towards misleading if overused.

This was a very brief run through a dataset ripe with many interesting questions and research avenues to dive into. In our next blog on this topic, we will look into processes for detecting victims of a pump and dump and allocating risk scores to NFT’s based upon many different network metrics including the cycles discussed here.

We are also in the process of acquiring a much more up to date version of the same data, including both the Bored Ape Yacht Club explosion and recent NFT market crash. Both of which we can look at under the same lens!

The basic version of this algorithm is available for free as part of the Raphtory Open Source Project. This can be run on any data you like as long as it fits the bipartite model described above.

The original data from this project was from here: